So I'm sure by now you've taken care of the family gifts (if not, it's go time people!) but have you thought about the neighbors yet?  We're already into our second week of December (can you believe it?) and there isn't much time left.
I've been busy the last few working on my neighbors gifts...if you get started NOW you may have time to whip up a few of your own! 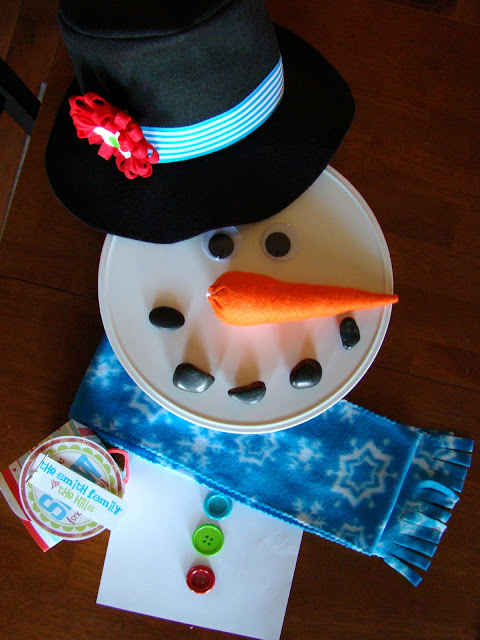 I found this idea last year a little too late but cataloged it as a definite tO dO...LOVED IT.  I thought it was a great alternative to the standard old plate of cookies...and something you can use over and over, year after year.
the SnOWmAn Kit...
just add snow.
First step: whip up a few hats.  I used this tutorial to make them.  I was seriously scared of screwing these up...but they actually turned out pretty easy and quick to make up...so I made 20! 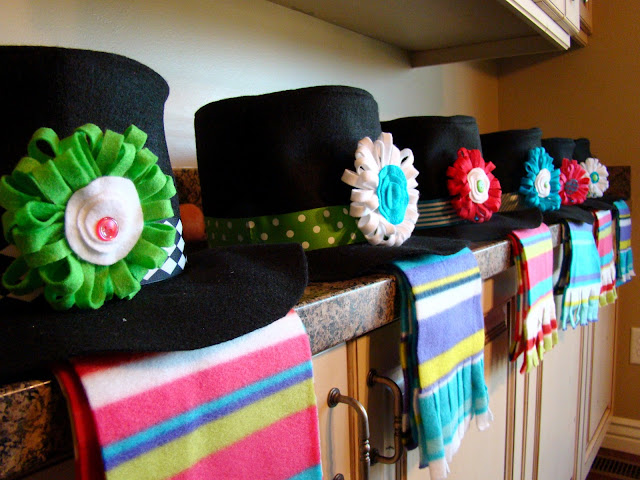 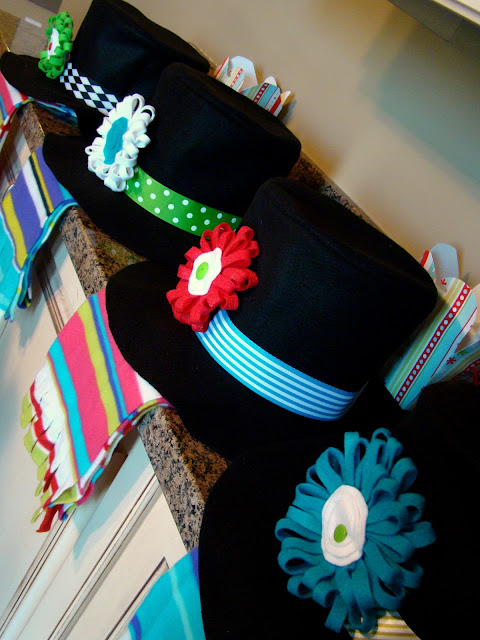 Next step: the scarfs.  Rather than going to the fabric store and buying a yard of fleece for $7.00 a pop (the cheapest I ever found it), I headed to Old Navy and bought 2 fleece blankets for $4.50 each (Black Friday sale...but I went after the crazies had left).  I cut them into 6 inch strips and voila...9 scarfs per blanket.  And they already had the fringe cut!  Can't get easier than that. 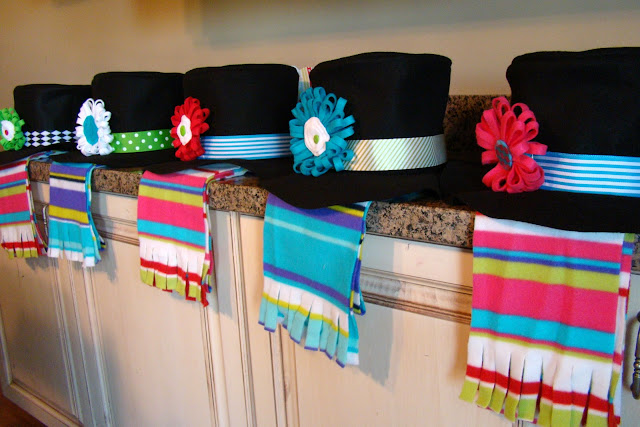 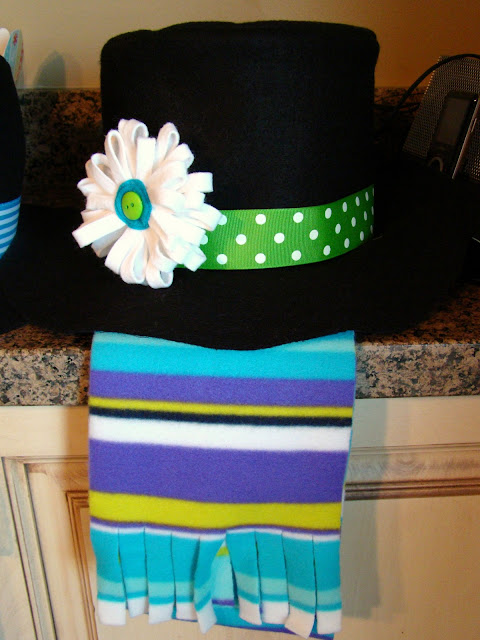 Next to fancy up the hats a bit I added ribbon and made a few of these felt flowers to attach. 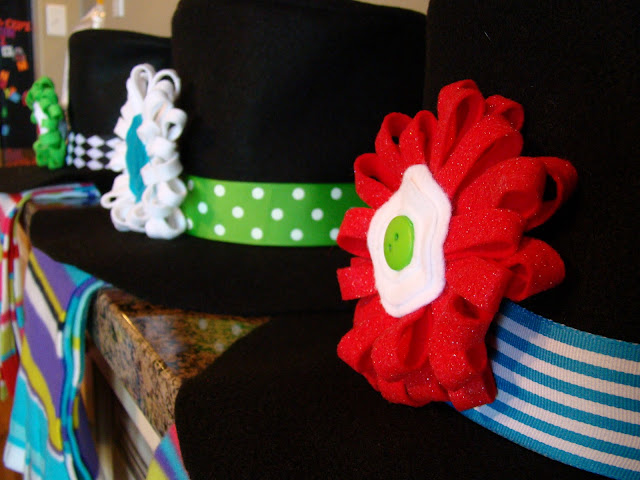 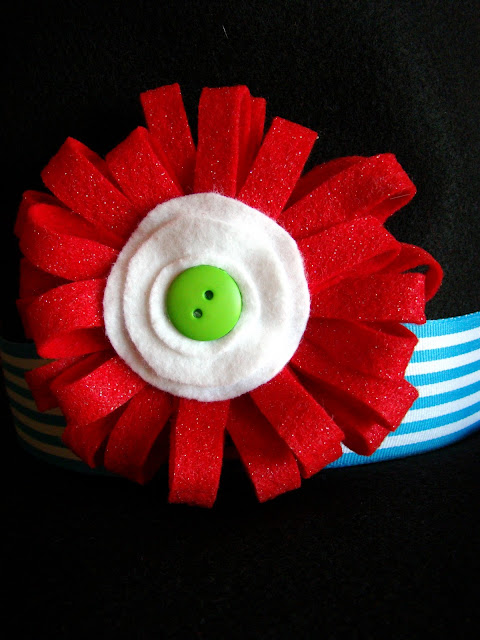 Then I wrapped them up.  I cut a circle of cardboard for the bottom of the hat and stuffed them with a little tissue paper...got them ready for delivery. 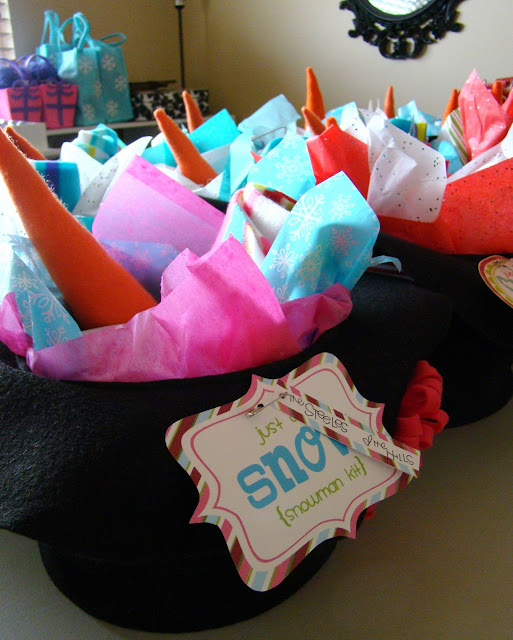 Boxed up all of the BiTs aNd piECes. 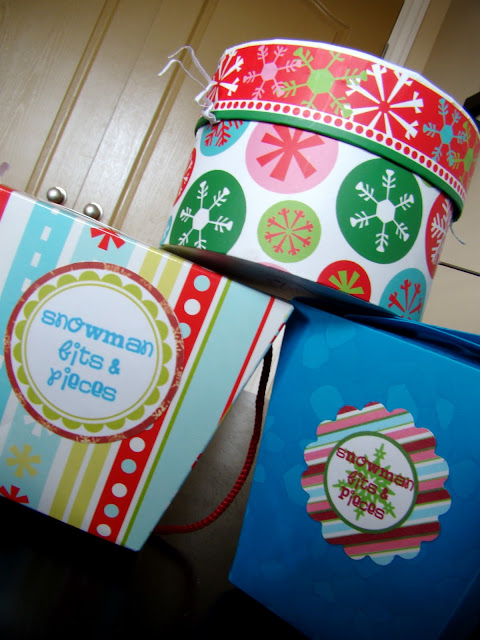 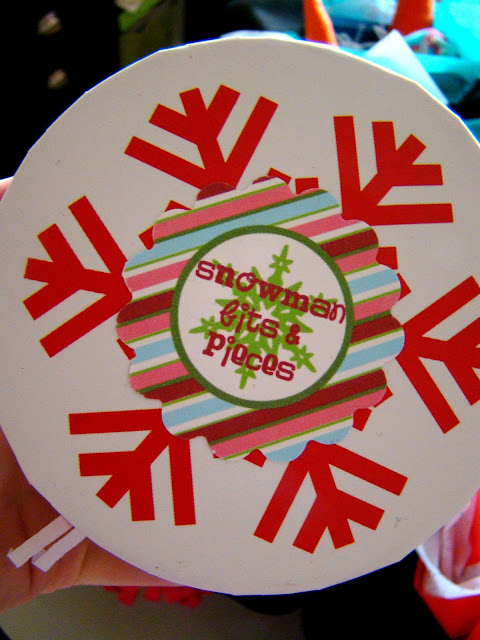 The BiTs include: A feLt CarrOt Nose stuffed and glued to a chopstick...I'm feeling pretty smart about this one!  I had a million Pei Wei chopsticks just sitting in my drawer unused.  They turned out to be just the right size and they're already pointed at the end.  I originally was going to use dowels and sand the ends to a point...but the chopsticks are free if you like Chinese food!
*A side note...I did try to go get a few more at Panda, but they weren't as good quality.  I didn't end up using them because I thought they might break easily when jamming them into the snow. 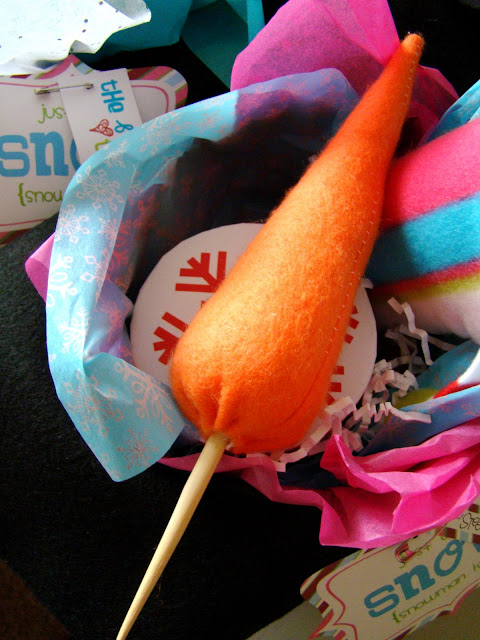 And for the other bits, 2 BiG GoOgiLy Eyes, 3 BiG buttOns, and 5 black rocks (for the mouth)...the decorative kind you find in the flower dept.  I got mine at the $ store...they were nice and BiG, too!
I packaged them up individually.  Then put them all in a box for safe keeping. 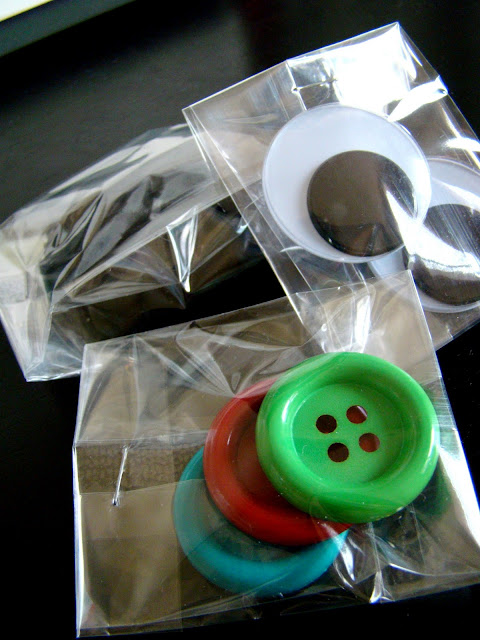 And last, a tag...
just in case somebody didn't get it.
Sometimes you have to spell these things out. 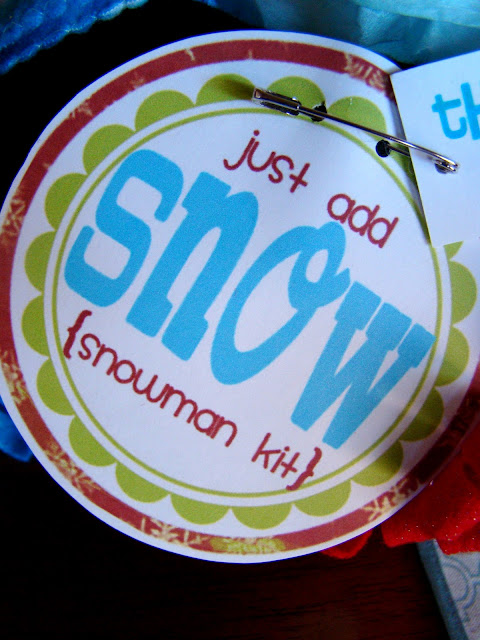 It feels good to have that one checked off my list... 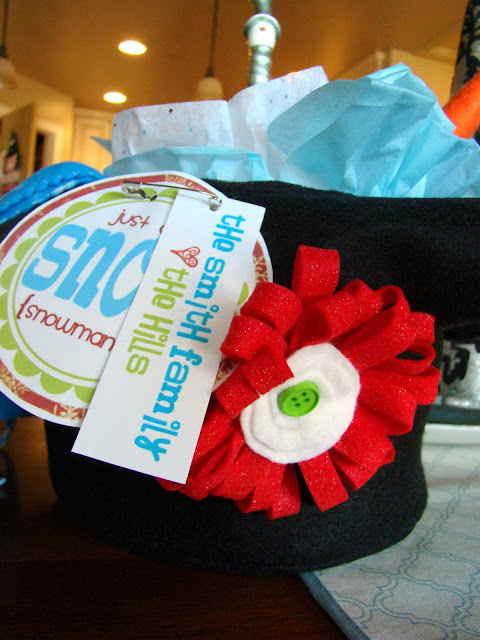 Now if we can just get our snow back!  What good is a Snowman Kit with no snow?!
Posted by tHe HiLL FaMiLy fiVe at Tuesday, December 07, 2010

That is the cutest idea ever!!! I am going to save it for when we move somewhere where it actually snows during the Holidays. Thank you so much for sharing - that is too cute!

Such a cute idea...just found your blog today and can I just say...I'm diving in..to read it all:) Love your great ideas and sense of style...can't wait to keep up with you!

Too bad I live in sunny So Cal because these are ADORABLE!!!

Can I be your neighbor!?

Could you show a tutorial for the cute flowers on the hats? Adorable idea...LoVe your blog!!!

Okay, I so wish it snowed here so that I could give my neighbors this cute gift!!

I will be sharing it on my blog tomorrow!

This is so incredibly cute....I'm totally going to make some!

oh my goodness gracious. can I be your neighbor? I have been looking for something like this for my kids. These are so cute. Cataloging myself, for next year. :)

This is just what I needed. My son gave his coat to "Frosty"! Blogging this to do after the holidays. Thanks so much!
4growingboys.blogspot

That is totally awesome, here you would need a tumbleweed since there is no forecast for snow this winter =). I am your newest follower, I had to when I saw your dog in one of the other pictures.

Just wanted to let you know we featured you today on WhipperBerry, so come by and grab a featured button!

Way cute and I love the idea of fleece blankets. I'll keep that in mind when I want to make fleece throw pillows!

How cute is that! So adorable! That would be a cute class room gift too!

this is the cutes thing ever! I'm definitely doing it this year -- good thing a came across this in August....I tend to prcrastinate! lol Thank you so much for sharing!

TOTALLY LOVE THIS!
I'm going to be snooping around your blog a little more.

LOVE this and totally doing it next month at our super saturday!
I also love the tags you made, do you share those? I would love to able to print them out.

Oh, and how did you make that super cute felt flower on the hats?
~Jaime

Hi! I saw these posted last year and like you I didn't have a chance to get them done but they have been on my list for this year. I would love to give one to each family for our nieces and nephews. I would love to know how you made the flowers as well. They are soo cute and I love the label too! I'm putting my shopping list together and can't wait to have my kids help make them! Thanks for posting:) ajepsen@live.com 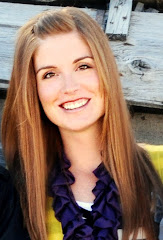